Being a 24/7 caregiver to her stepfather, Pat Bolin was at the point of screaming – the stress was so intense. And then she found Mindful Care Adult Day Services. Now, two days a week, she can get some rest and tend to her own needs and responsibilities.

“It was to the point that I was going to scream if I didn’t find some place for Doc.”

Austin Eugene Manire, or “Doc,” as he has been pegged for most of his 94 years, is a veteran of World War II. He started showing symptoms of Alzheimer’s disease in 2007 shortly before his second wife (Pat’s mother) passed away. 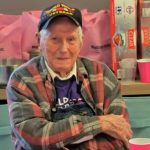 “At first we pushed his memory loss off as just part of the aging process.” Pat said. “I remember the first time Doc got out of his truck, and he just had this blank look on his face. He didn’t know where he was. After mom passed away, I would travel back and forth from Shelbyville where I lived and my mother’s farm where Doc lived between Unionville and Rover in Bedford County.”

Doc was born in Rutherford County in a small area called Bunker Hill, just outside of Rover and Eagleville, where he lived most of his life. When Doc was a child, he and his siblings and neighborhood friends played doctor. (Doc was in the middle between seven brothers and two sisters.) One might guess who was always the doctor. One of his neighborhood friends started calling him “Doc,” and it caught on.

When Doc was 17, he joined the Civilian Conservation Corps, which was founded by the government to create jobs. He was working in Oregon when the Japanese bombed Pearl Harbor, and they immediately sent all the boys home. Doc wasn’t home too long before he received a letter of invitation from Uncle Sam.

“Doc was inducted into the service in March 1943 at Camp Forrest in Tullahoma.  As an infantryman, he was sent to Fort Jackson.” Pat noted. “He was fortunate enough to be pulled from there and sent overseas as a replacement, because the 106th Infantry was pretty much wiped out later on.

“He was sent to Algiers where he served with Military Intelligence. They went through Italy and France and eventually ended up in Germany. Doc engaged in combat at the Battle of the Bulge, picking up prisoners from there to return for interrogation,” Pat recounted.

Doc was discharged right before Christmas in 1945, with the rank of Private First Class. As Pat noted, he did not enjoy military service enough to make it a career, although his captain tried to persuade him to do so. However, the army did give him the opportunity to see the sights and meet a lot of people, which he enjoyed.

Four of his brothers also served in the war, and his oldest brother, who served stateside, had died prior to the war. Doc was happy to return to country life in America. He married his first wife and had three children. One of his sons fell into a sinkhole and drowned when he was five. Doc lost another son about four years ago. His daughter is still living.

“I’ve known Doc since I was about 8 or 9 years old,” Pat recalled. “My mother was married to my father, and Doc was married to his first wife. The two families would often get together and play Rook. Over a period of years, both of them divorced their spouses. In 1970, Doc and my mother were married, and he moved from where he was living to my mother’s farm,” Pat said.

“Doc has always been a very simple and honest man,” Pat noted. “He’s the only man I’ve ever known who never bought or rented his own house. He worked for people and lived on the property, cutting wood, fixing fences building barns and farming the land. Before he moved to my mother’s farm, he lived in his brother’s house, who lived out of state, and took care of his farm. He raised a family there, despite the fact that there was no electricity and no running water.

“He’s always been good to me, and he loved my mother dearly,” Pat said.  “He left child-rearing up to the women. He was not what you would call a real outwardly loving person. My mother died in 2009. Doc doesn’t remember her at all anymore.”

In 2007, Pat’s family noticed Doc’s behavior was changing. He was showing signs of dementia.

“It was to the point that I was going to scream if I didn’t find some place for Doc. I looked around in Shelbyville, but no one had any openings where I could take him. Then I got on the Internet and found Mindful Care. It was not too far away and within my price range. I found out that the VA would pay for another facility, but when I looked at it I didn’t think it would be a good fit for him. He is happy when he is at Mindful Care. At the end of the day, he will tell me he didn’t talk to a single person. But when I pulled up and looked through the window one day, he was talking to two of the ladies and having a great time.”

“Those first few days he was worn out, but he gets to see people his own age and reminisce with one another, and the workers there seem so nice and genuinely care about people. He goes two days a week.”

Pat remembers a picture of a seascape that Doc painted at Mindful Care. “The picture was quite good, and the family was impressed,” she recalled.

Pat describes Doc as still extremely patriotic and a lifelong Democrat. He has a keen sense of humor, and he and his 90-year-old pal like to get together to talk and laugh.

“He treated me like one of the boys,” Pat said. “One of my favorite memories of Doc is him sitting on a tractor with grease on his face, wearing a felt hat and a big grin. He liked to play tricks on people. He used to tell me about his dog Spot. Of course, there was no dog named Spot.

“Doc would never be happy in the city,” Pat noted. “He was always on the farm and that’s what he loves. He used to watch the news on TV. But now he is not happy with the way the world is.”