Meet a Member of the Mindful Care Family-Wanda Kennedy

At Mindful Care, there’s a whole lotta lovin’ goin’ on!

She loves to go there. She loves the games. She enjoys the arts and crafts. She felt a great sense of pride when she brought home a little wooden train she had painted for her oldest grandson. The day’s activities help her to feel a sense of independence, which is so important for a woman and former teacher for 39 years who wants to remain busy and active. She is 75-year-old Wanda Kennedy, a member of the Mindful Care Adult Day Services “family.”

Mindful Care is a 5-day-a week program, operating in donated space by New Vision Baptist Church in Murfreesboro. The program welcomes people who have mild Alzheimer’s and other compromised memory issues. While Mindful Care is not affiliated with a particular religious tradition, the organization is dedicated to extending love and compassion to those age 55 and up. Operating from 8 a.m. to 5 p.m., Mindful Care gives family caregivers a much-needed break during the day and, in some cases, the ability to continue employment. 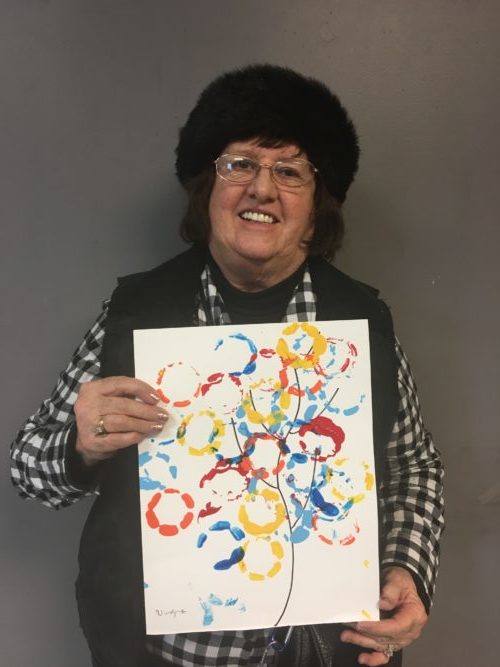 Wanda Kennedy shares some of her artwork.

“Mom just absolutely loves going there,” says daughter Karen Yonge. “She calls everyone ‘sweetheart’ at the program. She loves on everybody.” As Karen and her mom were leaving the program one afternoon, one of the participants remarked, ‘Thank you for sharing your mom with us.’ “You can’t put a price tag on that,” Karen said.

Wanda was born and raised in Oklahoma. When Karen was 4, her parents—her dad also taught school—decided to relocate to California where teachers could make a better living. The family lived there for 40 years.

“My mother was a widow at age 29,” Karen noted. “My dad was killed in a motorcycle accident when he was just 33 years old. He had just finished building a new home.”

Karen described her mother as a caretaker. Wanda met another man some time after who was in the middle of a divorce. He and his wife had lost a child the same year Karen’s father was killed.

“They bonded over their grief,” Karen said of her mother and her gentleman friend. “When I was expecting twins, he was all excited about being a grandpa. I didn’t know a lot of older people who had boyfriends—it was weird. I told him if he wanted to be called ‘grandpa,’ he needed to marry their grandma. They were married after dating for 13 years.” The man was an alcoholic, Karen added, which “put mom in some physical and emotional danger. But she’s tough and lived through it.” Coincidentally, Wanda’s second husband also was killed in a motorcycle accident.

Karen explained that with three daughters looking forward to college, she researched Tennessee and learned how many universities there were. When they visited the state, her husband interviewed for a teaching job. Eventually they moved to the Volunteer State and brought Wanda with them. They have lived in Murfreesboro for 10 years.

Every couple of months Karen arranged for her mother to visit family in Oklahoma. In 2013, Karen went to the Nashville Airport to pick up her mother who was returning from one of her visits. Her mother did not show up. What was supposed to have been a brief visit to Oklahoma turned into a 3 ½-year separation from her mother, which, for many reasons, caused a huge and lasting rift between family members. During that time, Karen had very little communication with her mother. Through her cousins, Karen learned that her mother was unhappy and wanted to go back to Tennessee. Following prolonged court hearings—Karen’s cousin had become Wanda’s legal guardian—Wanda returned to live with Karen and her family.

“Mom’s been back with us for a little over a year,” Karen said. “She lived with us for about eight months, then it was approved that she could be in her own apartment. Up until recently she had a caregiver who came two or three times a week, but the caregiving situation just changed recently. We’re looking into making changes, but she will still go to Mindful Care because she loves that.”

About seven years ago, while visiting in Oklahoma, Wanda started slurring her words and was diagnosed with encephalitis. She was semi-comatose for several days in the hospital. It affected her short-term memory, Karen recalled. “Her memory was stuck in her teenage years. She has gained a lot of her memory back and has shown even more improvement in the last year.

Karen described her mom as driven and organized. “She has a sense of humor, and she doesn’t worry about what people think. She has a very childlike sense of wonder. She does Sudoku puzzles and she loves to read. She likes to watch the Hallmark Channel and spend time with her family. She’s easy to please.”

Mindful Care has exceeded Karen’s expectations. “The ladies who run the program care to listen. They listen to my mom’s stories. And they are so observant. They noticed that mom was having a hard time getting around—one leg seemed stiffer than the other. Because they alerted me, I took mom to the doctor. She had a blood clot. I really appreciate their looking out for her. They are part of my family that helps us make sure that mom is safe and having a quality life.”

Wanda loves Elvis Presley, and “Blue Suede Shoes” is her favorite song,” Karen shared. On a trip back from Oklahoma they visited Graceland and stayed in the Heartbreak Hotel. Above each bed was a photo of Elvis—one when he was a young heartthrob and the other an older man. Mom said, ‘I want the bed with the younger Elvis!’ She’s a real asset in our family—a wonderful mom, grandmother and great grandmother.”