Art Longuevan: A Lifetime of Memories and Achievements

Art Longuevan, age 86, attends Mindful Care Adult Day Services in Murfreesboro one day a week. His son, Scott, says he seems “to have a lot of fun when he’s there.” When Scott picks his father up, he’ll ask what he did that day. Although Art seldom remembers specifics, he, like other program participants, enjoys the activities “in the moment.” Fun and joy are experienced in real time, but because participants have a degree of dementia, including symptoms of Alzheimer’s, they may not recall what they did five minutes ago. 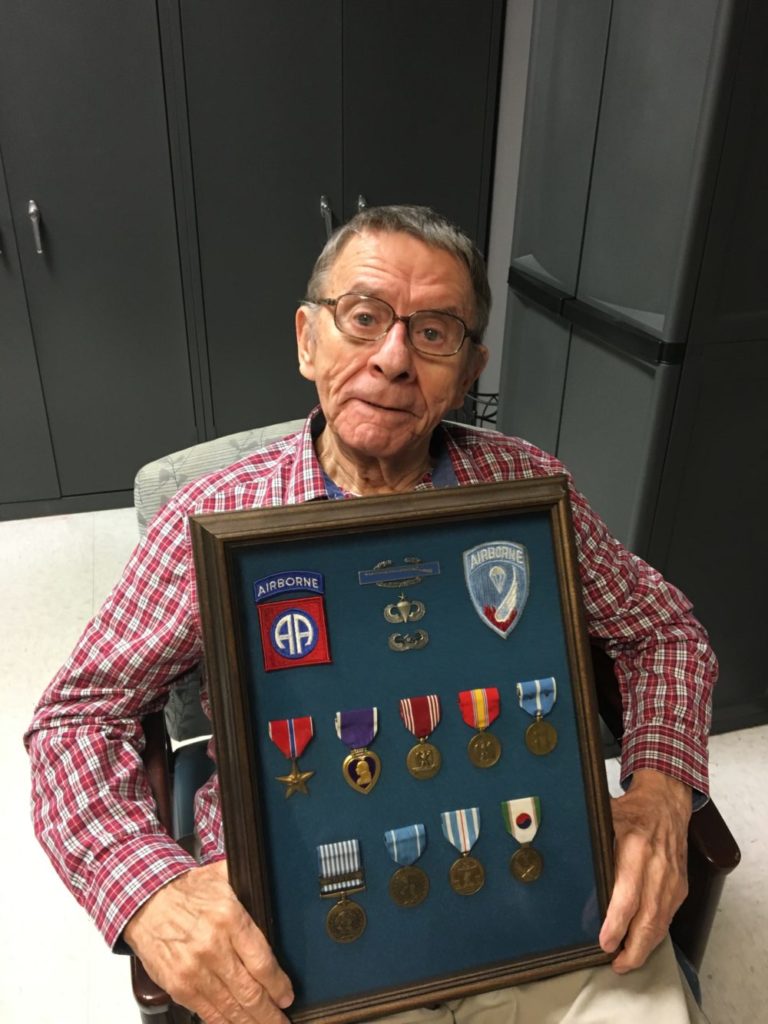 Art has lived a fascinating and even intriguing life. Born in Los Angeles, he was the third youngest in a family composed of four sisters and two brothers. He grew up during the Depression, and he and his brother would fight others for food scraps behind restaurants. After his sophomore year in high school, he joined the army, where he enjoyed three meals a day for the first time in his life. He served in the army for seven years, reenlisting after four years to go to Korea.

While serving his country, Art was in the airborne special forces where he was a “forward observer,” a soldier who directs artillery fire onto a target. He was also an unarmed-combat instructor. Art received two Purple Hearts and a Bronze Star, among other honors. “He has forgotten what some of his medals are,” Scott says. “I have to tell him.”

After the Army, Art attended Mt. San Antonio College outside Los Angeles for two years where he wrestled and played football. He placed 4th in the nation in his wrestling weight class and later attended the LA Rams training camp. A call from the Los Angeles Police Department turned him in the direction of law enforcement. He spent 7 years with the LAPD as a homicide detective and then 30 more years with the California Department of Justice as an undercover agent in the Bureau of Narcotics Enforcement. “Even though he was gone from home a lot, he was always there for me,” Scott said. “He never missed a single wrestling match or football game.”

Art retired at age 61, but he remained busy and productive. Up until a year ago, he volunteered at the York VA Medical Center five days a week. He received a service award from the VA for his 13 years and 30,000 hours of volunteer service.

Art was diagnosed with vascular dementia in 2013 and came to live with Scott and his family (wife, Tracy, and three children) in May of the following year. “Dad was having trouble doing things that he used to do for himself,” he noted. Scott had received a call from someone who told him he was with Scott’s dad who seemed to be lost. After that incident, they ran tests and discovered Art’s dementia.

Scott says he grew up in a family that took care of their own.  He knows they may eventually have to place Art in a facility, but they want to keep him at home as long as possible. Someone at the VA told them about Mindful Care Adult Day Services, which operates out of donated space in New Vision Baptist Church. They looked at the program and decided to try it. Scott says while his dad attends one day a week, they may increase that eventually.

“When I go there, I know I’m visiting him in his world,” Scott adds. “He didn’t used to be sociable, but now he wants to go out. He wants to see people.”